Going back to 2009 and updating each month, our World’s 50 Most Popular Brands dashboard analyzed conversations from all over the social web to highlight the brands people talk about most often and to what degree of favorability.

Below are the highlights of some of the largest changes in rank and extended coverage of what caused the shifts in October 2015.

Tim Cook enthusiastically announced that Apple Music has reached 6.5 million paying users, an extraordinary number for such a new service. Finally, their was an increase in conversations discussing leaked screenshots of an Android version of the Apple Music App.

2. Several controversies and a new innovation launched Boeing to #44

In innovation news, Boeing introduced a new ultra light metal and a photo of the material sitting atop a dandelion took off across the web.

As for the controversies, a Boeing passenger jet crashed on the tarmac in Florida and the company settled a lawsuit focused on allegations that the company defrauded the US government.

3. Amazon climbed 20 places to #14 after taking on fraud and making moves to weaken its competition

As the streaming TV device market continues to grow Amazon has decided to remove popular products from Apple and Google that compete with their Amazon Fire TV product lines.

In a move to eliminate and prevent fake reviews on their site, Amazon is suing more than 1,000 freelancers that have accepted compensation for writing glowing product reviews for sellers on Amazon's platform.

4. FitBit debuted at #31 on rumors that FitBit devices can be easily hacked

How long does it take to persuade a FitBit into giving up the personal details of its owner? According to several reports, less than ten seconds.

The story quickly circulated and received enough attention to warrant a corporate response from company representatives.

5. Wireless company Verizon got a boost to #43 on the announcement of a new, nearly indestructible phone

The Droid Turbo 2, the world's first phone with a shatterproof screen drove the internet wild with leaked photos, rumors, and finally, an official announcement by Verizon.

Videos, images, and reviews putting the phones claim to the test subsequently followed.

Lacking the controversy MTV award shows are usually synonymous with, conversations about this year's MTV EMAs were heavily focused on Justin Bieber becoming the most awarded artist in EMA history. 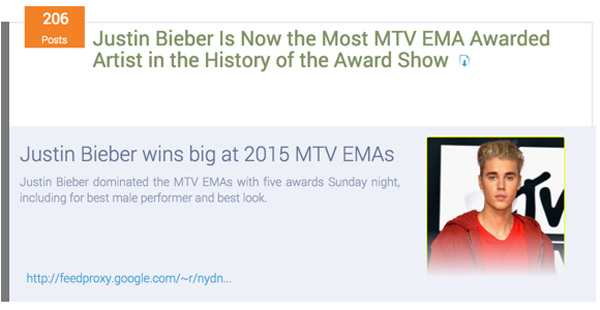 Hermes' new watch bands for the Apple Watch, which were announced at Apple's big event in September, went on sale this past month driving a significant number of conversations for the brand.