Going back to 2009 and updating each month, our World’s 50 Most Popular Brands dashboard analyzed conversations from all over the social web to highlight the brands people talk about most often and to what degree of favorability.

November 2015 was a massive month for entertainment with high profile movie, game, and music releases. Below are the highlights of some of the largest changes in rank and extended coverage of what caused the shifts in November 2015.

1. Starbucks' war on Christmas launched the brand up 14 spots to #19

This year, Starbucks decided to change their traditionally decorated red holiday cups to basic red cups without any decoration at all.

The result? An angry echo-chamber of tweets, including several from Donald Trump, denounced Starbucks for the company's apparent hatred of Christianity.

The majority of the internet responded by poking fun at the ridiculousness of the statements being made against Starbucks. 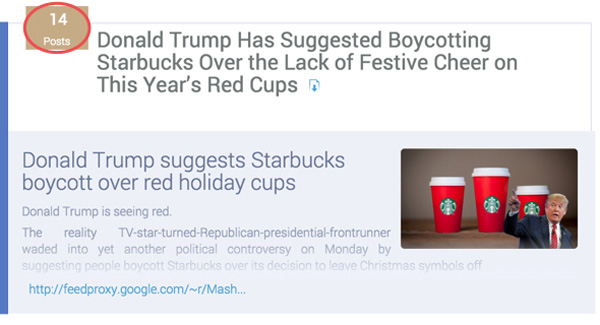 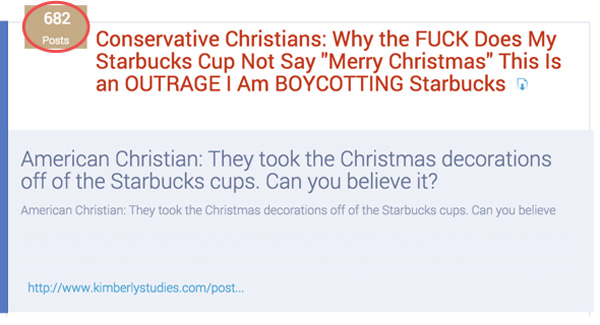 Of all the releases, Fallout 4 was the breakout game for both the PS4 and Xbox One consoles.

The big surprise for the Xbox was not that it moved up a massive 18 places, but that the console's exclusive Halo 5 title was not the most talked about game release.

3. Big releases in music cranked Spotify up 9 places to #20. Without help from Drake, Apple Music tumbled down 25 to #46

In the music world, October 2015 was all about Drake's 'Hotline Bling' but November belonged almost entirely to Adele, just not across streaming sites (she chose to not release her music on Spotify or Apple Music).

While Adele was selling her music in record-breaking quantities, Justin Bieber and the guys from One Direction were the focus on streaming music platforms.

4. Video gaming, movies, and a new flagship smartphone moved Sony up 10 places to #30

Sony had a huge month of releases, from gaming titles for the Playstation 4 to a new flagship phone, and the much-anticipated debut of the latest James Bond flick, Spectre. 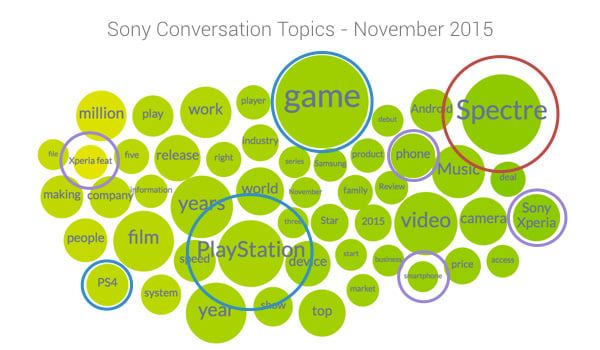 5. Kanye continued to drive engagement for Adidas, boosting the brand 16 spots to #34

To say that the Adidas Yeezy Boost sneaker line is a success would be a massive understatement.

Available only at a select number of retailers, the shoes continue to sell out and remain highly sought after by sneaker geeks and fashionistas everywhere.

As a result, Adidas is getting a major lift in the number of consumers talking about the brand.

6. Movie trailers, new games, and company acquisitions brought Activision to the Top 50 at #50

This was a HUGE month for Activision Blizzard.

The company released a trailer for an upcoming World of Warcraft movie (based on the prolifically popular game), released an expansion pack for Starcraft II (another majorly successful game), launched Call of Duty Black Ops 3, and acquired Candy Crush maker, King Digital, for $6 billion.