It used to be simpler, too: your celebrity/spokesperson appears in radio, television, and/or photo ads. But social media has changed the rules.

Brands have to worry about the overall public perception of these spokespeople as advertising has developed from traditional media into the modern multichannel experience.

Do brand advocates and spokespeople actually hurt the brands they represent? We looked at five well-known faux pas to find out.

What Happened: On July 7, 2015, the FBI raided Fogle's home for child pornography, causing Subway to indefinitely suspend ties with the spokesperson.

On November 19, 2015, Fogle formally pleaded guilty to the charges and was sentenced to serve 15 years, 8 months in federal prison with a minimum of 13 years.

Comment: On the day the story broke, about 40% of Subway posts contain mentions of Jared; within a week, it fell to almost nothing.

When the story broke, negative sentiment for Jared spiked at 91% with men and women split 2:1 in conversation data, respectively.

While Jared did impact Subway's public perception, the brand was able to recover quickly. In the 4 weeks prior to the raid, Subway maintained an average 84% positive sentiment; in the 4 weeks following the raid on Fogle's home, sentiment averaged 74%, a fall of just 10%. 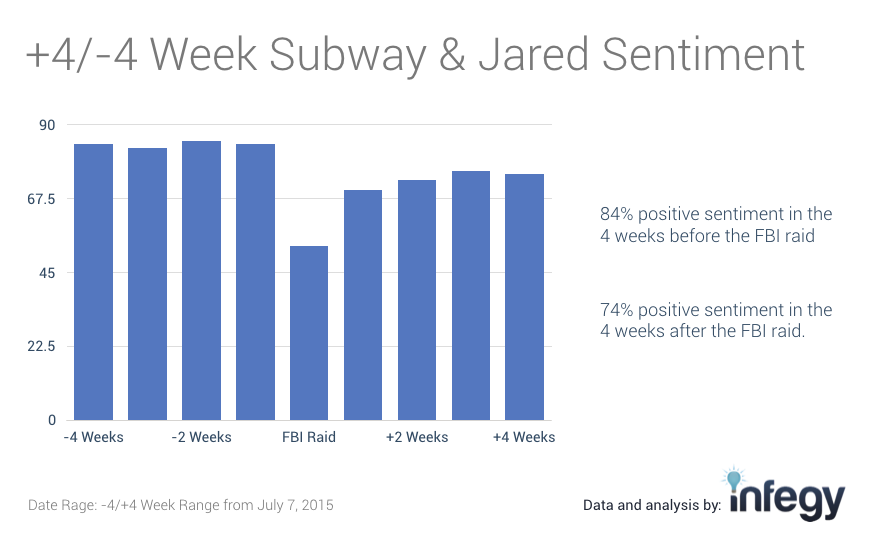 It took a little more than 4 weeks for sentiment to recover to its previous levels.

What Happened: Rob Schneider believes that there is a link between vaccinations and autism.

After appearing in an ad which declared State Farm provided health insurance including coverage for vaccines, Schneider declared that his First Amendment rights had been violated.

State Farm responded, saying simply that the ad had "unintentionally been used as a platform for discussion unrelated to the products and services we provide."

Comment: Despite the overwhelming negative response from certain audiences like parents, just 3% of conversations for State Farm during this time contained mentions of Rob Schneider.

State Farm experienced an average sentiment lift of about 10% from ~70% to almost 80% after dropping Schneider from representation.

What Happened: After claiming the record 8 gold medals in the Beijing Olympics in 2008, Phelps was photographed smoking from a bong containing marijuana. Kellogg's dropped him from sponsorship and USA swimming suspended the swimmer from competition for three months.

Sentiment for the photo within Kellogg's conversation averaged at 48% negative, staying that way for over a month. But Kellogg's sentiment got a little higher -- as did Phelps, apparently -- with the release of the infamous bong photo.

Looking at historical conversation data, we found that a peanut butter recall the month prior affected Kellogg's much more negatively, with Phelps' gaffe unintentionally giving the brand a much-needed distraction.

Before the recall, Kellogg's sentiment averaged 60%, falling to 35% as the story developed. This makes Phelps' association at 48% negative sentiment a relative improvement from the recall.

What Happened: After former employees sued Deen for alleged racial and sexual discrimination, the former Food Network star doubled down on the charges.

In her defense, Paula Deen indicated that 'of course' she used the n-word in her life without consideration for its racially-charged legacy.

Comment: Where other stories have seen a rapid decline in public mentions tying the spokesperson to the brand, Food Network exhibited a more sustained association with the disgraced brand advocate.

5. Allegations against longtime Jell-O spokesman Bill Cosby impacted both the celebrity and the brand.

Comment: In the week the story broke in November 2014, 10% of Jell-O conversations contain mentions of Bill Cosby.

In the weeks before the story, Jell-O averaged around 55% in positive public sentiment. As the renewed allegations against Cosby surfaced and the story continued to develop, negative sentiment traded evenly with positive, averaging around 55% negative. 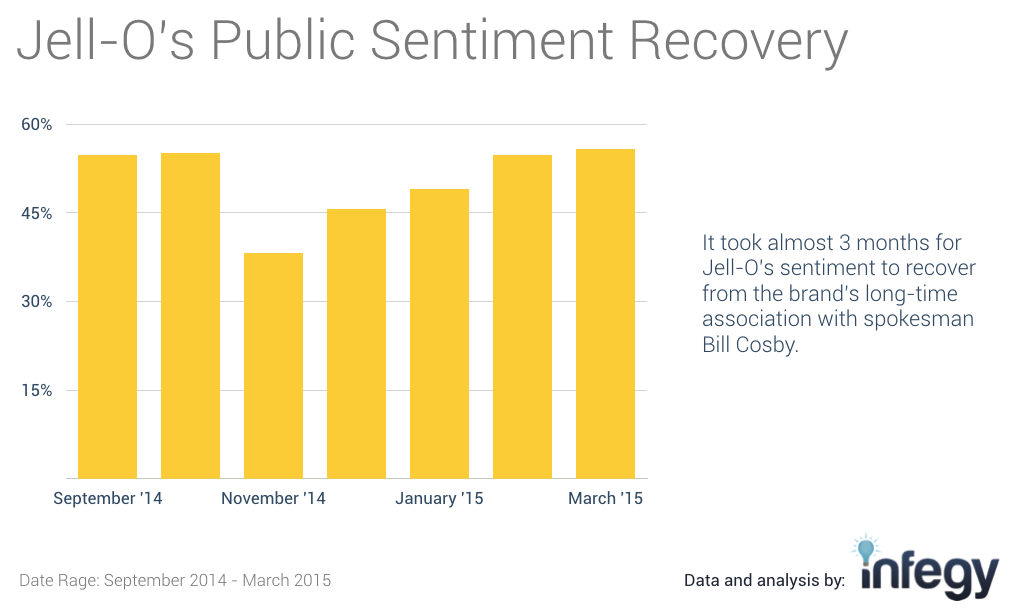 It took approximately 3 months for the brand's public sentiment to recover to prior levels.

What is the 'vampire effect'?

The vampire effect in product or brand endorsement is a phenomenon that means customers remember the spokesperson, but not the brand or product.

Researchers suggest the best way to measure this is through gauging consumers' recall of the brand after seeing them in an advertisement.

The reason I bring him up is simple: growing up, I saw him sell tons of products in late-night TV ads. To this day, though, I can only associate him with OxiClean, despite the long list of other products he advertised with his energetic charisma.

We can search public conversations to look at both sides of this question:

Here are a few examples to get you started:

What to do about the vampire effect?

Align spokespeople with your brand, don't mix-and-match. Athletes, for example, make excellent spokespeople for products people will naturally associate with sports -- recovery drinks, apparel, shoes, or even sports equipment they personally prefer. Celebs from other areas may overwhelm the audience's perception of your product otherwise.

Hire lower-key spokespeople. As our examples show, brands will carry the short-term associations wherever their spokesperson is involved -- the more unpredictable the spokesperson, the greater the risk they might cloud or dilute a brand's image. Managing this risk effectively sets ad campaigns up for long-term success.

Speaking of long-term partnerships, maintaining a consistent spokesperson tends to indicate sincere commitment. Every brand risks their spokesperson overwhelming the overall brand image, but the reverse could also happen in longer-term endorsements: the spokesperson can become synonymous with the brand instead because of their personal investment.

Peyton Manning, for example, has endorsed Papa John's since 2011. In 2012, he signalled his commitment to the brand by signing on to own 21 of his own locations for the brand in the Denver area.

Spokespeople CAN hurt their brands -- but it's not that simple.

Based on our data, it seems possible that bad spokespeople might have long-term repercussions for a brand, but in general, brands tend to recover quickly. In this post, we found that:

Brand advocates, constantly connected to fans via the social media universe at their fingertips, often leverage their social media presence as a benefit of their endorsement.

So how can brands minimize the risk of the spokespeople they hire?

Much of the risk can be mitigated in the research and vetting stage for selecting spokespeople. Brands must consider:

These are all things that social media intelligence tools like Infegy Atlas empower brands to discover, helping them to analyze all the connections between a potential spokesperson and a brand.

Proactive social research can even help prevent incidents that might damage the brand's image by analyzing what consumers are saying online.