Will Apple Watch Continue to Lead the Wearable Tech Market? Can Fitbit Keep Up? Social Listening Has Answers

Will Apple Watch Continue to Lead the Wearable Tech Market? Can Fitbit Keep Up? Social Listening Has Answers

If that question enters your mind frequently, you’re probably a wearable tech customer.


The device you own, whether it's a smartwatch or a true and blue fitness tracker, has likely provided you with some useful information about your health or helped you connect and communicate better in some way.

We wanted to know: which devices, features, brands, use cases are most utilized by wearable tech customers?

To answer this, we research and analyzed audiences and brands from online voices from all over the web in our social listening tool to build the social insights report for the wearable tech industry.


So which brands rise to the top? Apple, Garmin, Fitbit, Samsung? Do people use smartwatches or fitness trackers more? Which use cases are most important to these customers? We put all to the test in our report.


Here are few of our favorite takeaways from the report:

Let’s look at each takeaway for more insights on the wearable tech industry: 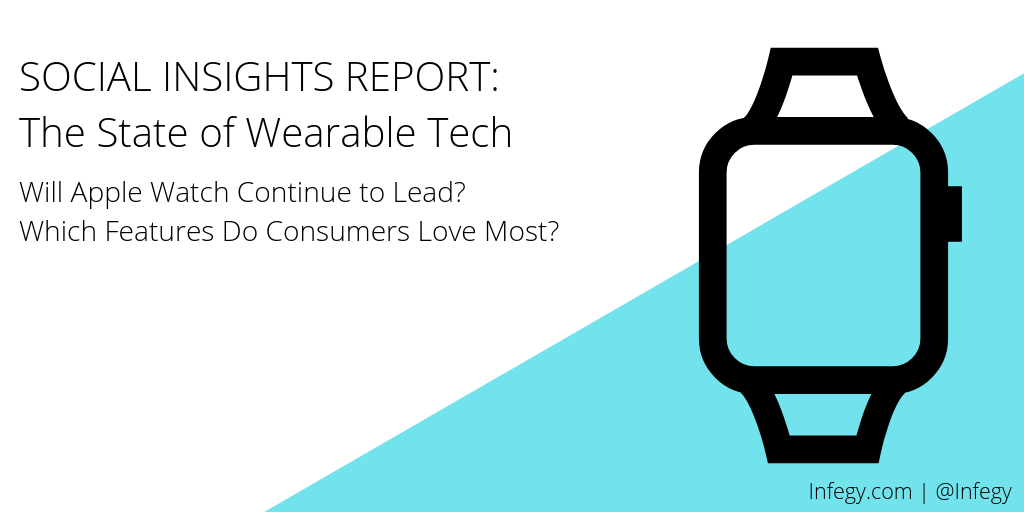 Apple has Ousted Fitbit as the Market Share Leader

Since the Apple Watch was launched in 2015, Apple has driven the wearable tech conversation and taken huge market share from Fitbit.  Apple not only leads sales, but they lead social conversation online.

Share of voice, or the ratio of online conversations and mentions of Apple Watch far outweigh the competition when compared to the other wearables like Garmin, Samsung, etc.


When we analyze those conversations for brand sentiment, we also see users speak much more highly of the Apple Watch than other products in the category.


However, one fascinating measurement occurs when we analyzed Amazon Reviews in our social listening tool. Our tool, Infegy Atlas, is able to scrub all of Amazon to analyze positive or negative sentiment, emotions, topics and other key data points.


A big surprise find in our analysis is that older audiences are the ones getting in on wearable market at the fastest rate.


Although consumers in the 25-34 age range own the largest share of voice from 2015 to 2017, those in the 55+ segment showed the greatest growth over the same period.


This means there is a market demand from all age groups for smartwatches and wearable tech companies ought to consider their elder consumers when developing and selling their products. 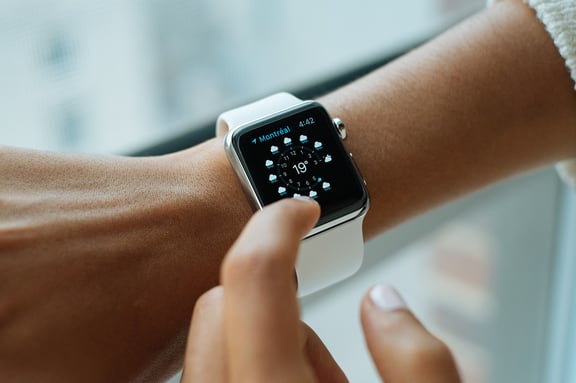 Overall, smartwatches and fitness trackers account for just 3% of all online conversations about tech devices, which also include smartphones, tablets, gaming consoles and tv streaming services.


The greatest drop off in online voice is in the fitness tracker category.


While Fitbit is the clear leader in the fitness tracker space over other brands like Jawbone, Xiamoi and Misfit, they are also struggling to keep up with Apple in share of voice, sales and wearable tech market share. They’ve lost 14% share-of-voice since 2015.


This underscores a larger overall issue with brands in the fitness tracker space. The category as a whole has slowed, year-over-year, after peaking in 2015.


As fitness watch makers look to find more ways to vocalize their audiences, they will need to continue to innovate and create products and features that can compete with smartwatches, and likely offer them at a lower price.

Download the report for more observations on the state of and future of the fitness tracker space in the report.

But as you’ll see in the next section, the function is not the only area in which wearable customers are finding value in the products. The way the device looks and their communication and convenience capabilities are every bit as important to consumers as their health features.


Let’s look at another key takeaway from the report: 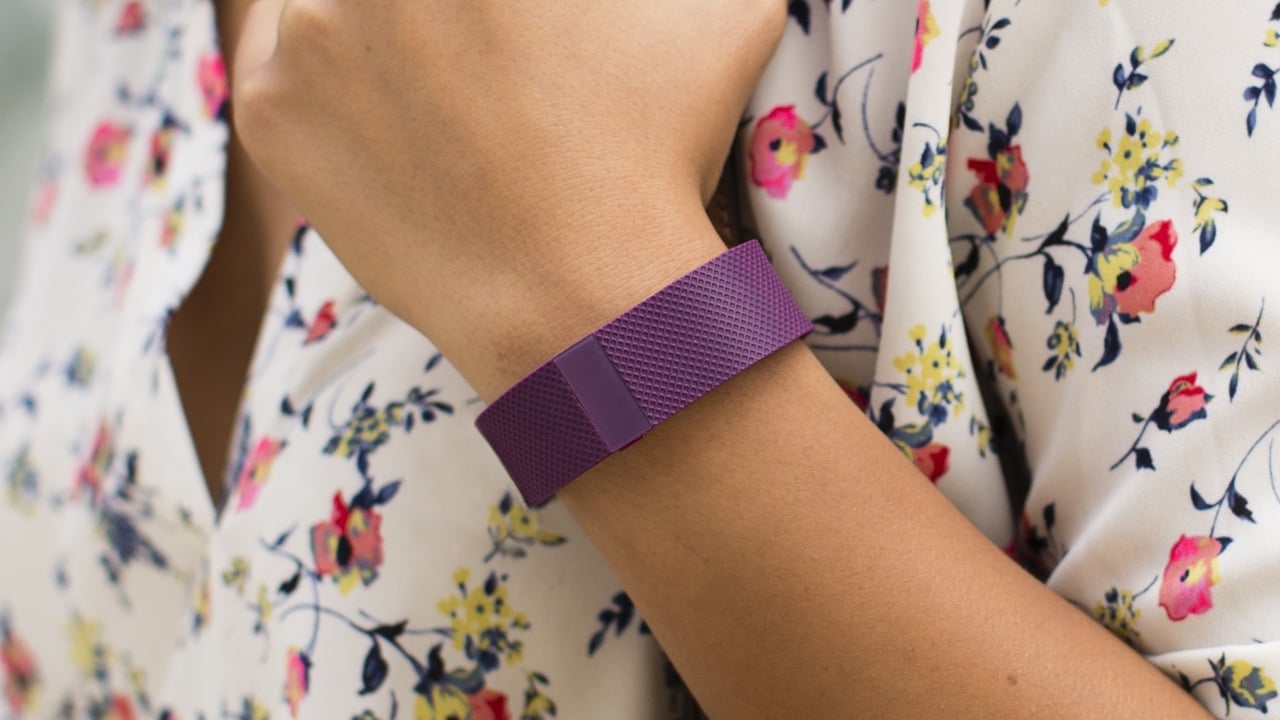 You may believe that health benefits are the most sought after feature for wearable tech devices.

But our data finds that it is just a small part that drives purchasing and use of the smartwatches and fitness bands.


First, fashion seems to be the most important consideration for smartwatch buyers than anything else. According to linguistics analysis of millions of posts, we found the leading topic associated with the devices was “looks and design”.


While the market is focused on the latest and greatest features, consumers are most interested in talking about how the device will look when they wear them.


Next, we also found a surprising new use case for wearables. These devices are now being made for and marketed to children.

We found that there is a high demand for those devices designed for kids, both from a fun or useful device for those youth, and also for parents being able to keep track of their kids and their safety.


In the report, you'll find details on the data behind which uses are most important to parents and their children. Those include: GPS, calling, video calling, camera and looks/design.


This is another of many of consumer use cases we observed in our data.


In case you were wondering, health benefits still loom large in peoples’ use cases with wearable tech devices.


Which health features are most important to consumers? We outline how much people say they use their watches for running, swimming, cycling, heart rate monitoring, step tracking and general overall dieting in our report. Find the answers by downloading the report below! 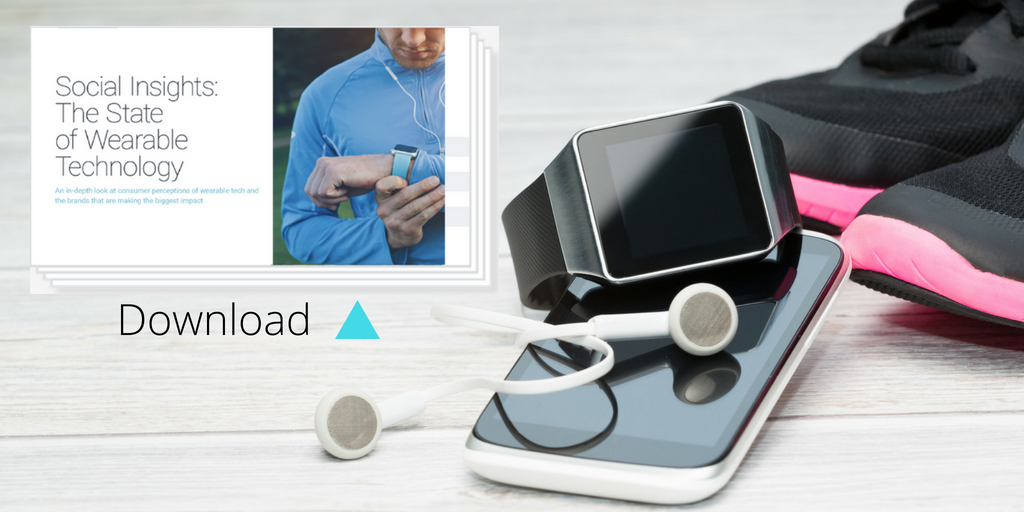