Obesity, A Growing Epidemic in America

Obesity, A Growing Epidemic in America

The obesity epidemic, as with American waistlines, continues to increase as time goes on. According to the Centers for Disease Control and Prevention, 36 percent of U.S. adults are currently obese and an additional 34 percent are considered overweight.

In analyzing obesity related conversations online over a 3 year period, the majority were related to sharing symptoms and asking others for help diagnosing root causes. These conversations made up nearly 8 million posts per year and were typically highly emotionally charged.

In the 3 years prior to this research, the issue of obesity had received increasing attention through television series, special reports, news stories, health initiatives and even billboard advertisements. Analyzing conversations that referenced obesity, 45 percent were related to the topic of health, 24 percent were focused on food, and 22 percent addressed weight related issues and goals. The common theme in the majority of conversations for all three topics was the long term health problems associated with obesity.

The Outcomes of Obesity

The primary long term effects of this condition include: cancer, infertility, bullying, financial strain, sleep deprivation, and premature birth. Online conversations about obesity were heavily focused on cancer, with more than 4.5 million posts over a 3 year period. Bullying and infertility were the next most widely discussed outcomes, albeit to a much lesser degree.

Thematic based research was employed to discover deeper correlations between common keywords and obesity. “Exercise”, “diet”, “diabetes”, and “habits” were strongly referenced in conversations about preventing obesity.

59 percent of the total conversations took place on blogging sites such as Blogger and Wordpress. Just 30 percent of content came from social media sites like Facebook and Twitter. 11 percent of conversations happened in forums, and the remaining 1 percent is from sites that are mostly made up of images. 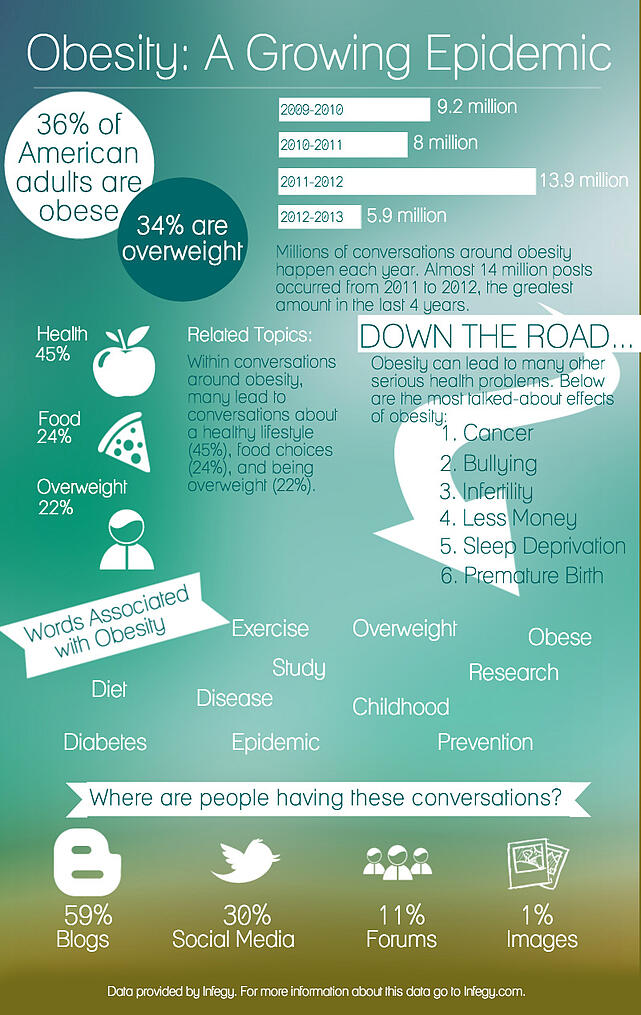