The same is likely true for many millennial TV viewers now maturing into higher buying power, and therefore the center of many marketers’ crosshairs. If I could watch cartoons online, I would never get anything done. Now that's captive audience advertising.

Nickelodeon’s 90s era television programming has been referred to as the “golden age” of game shows. Millennial audiences grew accustomed to watching their favorite teen-focused game shows, like “Legends of the Hidden Temple,” “Double Dare,” “Nickelodeon Guts,” “Nick Arcade,” and “Wild & Crazy Kids,” not even including the diverse lineup of cartoon shows as well. These shows featured heavy product placement for things like moon shoes, televisions, game consoles, and other highly-desired products for the target audience.

In this post, I’ll examine the current TV programming landscape and how it fails to attract Millennial viewers, particularly with Nickelodeon’s brand new, Millennial-focused “The Splat” using social data along with other outside sources.

Why the intense focus on millennial viewers? As reported by AdAge:

“Millennials and Hispanics are two of the fastest growing and hence most coveted demographics for a variety of brands. They’re also among the demos most likely to include families with children, particularly coveted by packaged-goods marketers selling everything from diapers to food for home use -- because families with kids buy more of each.”

Historical Nielsen data, as charted by Statista for Business Insider, suggests that teens and millennials are spending increasingly less hours watching “traditional,” or non-time-shifted TV. Instead, they’re choosing recorded programming via DVR they can watch later, video-on-demand services like Netflix, Hulu, or user-generated content sources like YouTube instead. 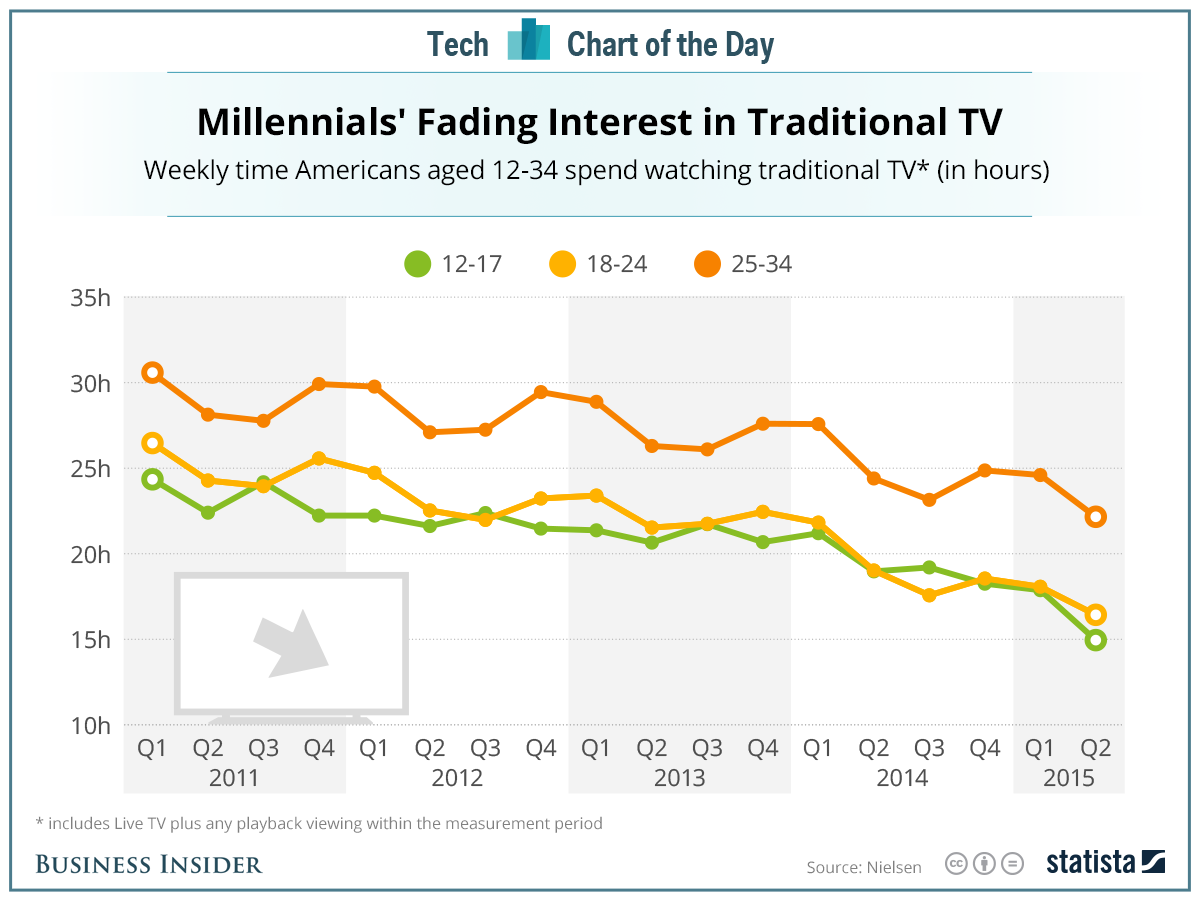 Facebook reports a similar view concerning the increasing focus on driving user engagement among these particular demographics. In a post about CPG product discovery, they outline an interesting example of why product discovery trends are shifting among these crucial groups of TV viewers. Other groups spend far less time researching products online before buying than either Millennials or US Hispanics.

Similarly, 16.3% of U.S. hispanics can only be reached on TV, vs. 17.5% only on Facebook. Engaging these users across multiple channels, however, dramatically increases marketers’ reach, finding 61.2% of Hispanics using a combination of Facebook’s ad targeting in addition to more traditional TV network ad strategies.

Facebook, though, has a point. Millennials are constantly on their phones. Erin Sills, director-global consumer insights for Facebook comments, “If you’re a packaged-goods marketer, that’s a point of market entry that these people are now moving into, and the best way to reach them is through the device that’s always with them, which is, of course, the smartphone.”

As a former millennial Nickelodeon game show addict, I remember being enthralled by the incredible array of products seemingly tailored towards trending product launches at the time. If it hadn’t been for Nickelodeon’s game shows, I might never have found out about so many products.. But Nickelodeon’s current strategy is not about product discovery or a particular CPG focus, it’s about recapturing the nostalgic Millennial audience with overtures toward their earlier years.

Looking at data since January 1, 2014, Nickelodeon experienced an all-time high in public sentiment response since the announcement and subsequent launch of their all-90’s programming block, “The Splat,” airing between the hours of 10pm and 6am, using otherwise maligned programming time on Nickelodeon channel Teen Nick.

In comments to The A.V. Club, Teen Nick SVP Keith Dawkins explained their approach to bring millennial viewers back into Nickelodeon’s fold. They’re looking to capitalize on nearly “35 million fans of ‘90s content.” Their strategy recognizes that many modern users will only consume the types of content they want, and skip everything else. “Right now [our fans] are enjoying the stuff they want to consume, and thankfully working here at Nickelodeon, we have a treasure chest of stuff that they love.”

While traditional TV networks have been suffering among different demographic groups, some recovering quite recently, Nickelodeon’s social media demographics seem evenly quite evenly split and indicate a trend of continued Millennial support.

AdAge reports that a “year ago, young women began disappearing from broadcast’s radar, and while the numbers for week one [this year] weren’t exactly encouraging, there appears to have been some improvement since the season began.” Women 18-to-34 were down ten percent in week one, the declines softened to minus-five percent in week two. Similarly, women 18-to-24 was down thirteen percent during the first week of the season, improving to minus-six percent a week ago.

Social analysis suggests that among Nickelodeon’s “The Splat” viewers, however, most of which are Millennials, demographics remain evenly split.

With more and more services launching that offer video-on-demand, it seems that traditional network TV is struggling to engage the Millennial audience. Network executives must learn from the popularity of streaming media to determine which programming choices work. Nickelodeon’s “The Splat” seems like a millennial silver bullet with traditional cartoon favorites from the 90’s, but will it work?

Based on the historical data available, as well as current TV engagement trends, the success of “The Splat” seems to rest tenuously on whether or not the evening timeslots are going to be enough to reach millennial viewers. Interestingly, there is currently no video-on-demand option for “The Splat’s” 90s programming. While Millennials seem to favor these viewing options, topic responses in discussion concerning Nickelodeon’s 90’s offering remain overwhelmingly positive.

Traditional network TV struggles to keep millennial viewers tuned-in to much of their current programming. Most networks have given in to consumer preferences, either choosing to license their content to already-existing on-demand services like Netflix, Amazon, or Hulu, or launching their own service, as CBS has with CBS All-Access.

While networks make content decisions increasingly backed by millennial marketing data, the popularity of streaming services may mean that Nickelodeon’s 90’s block will end with a ‘splat’ of its own. 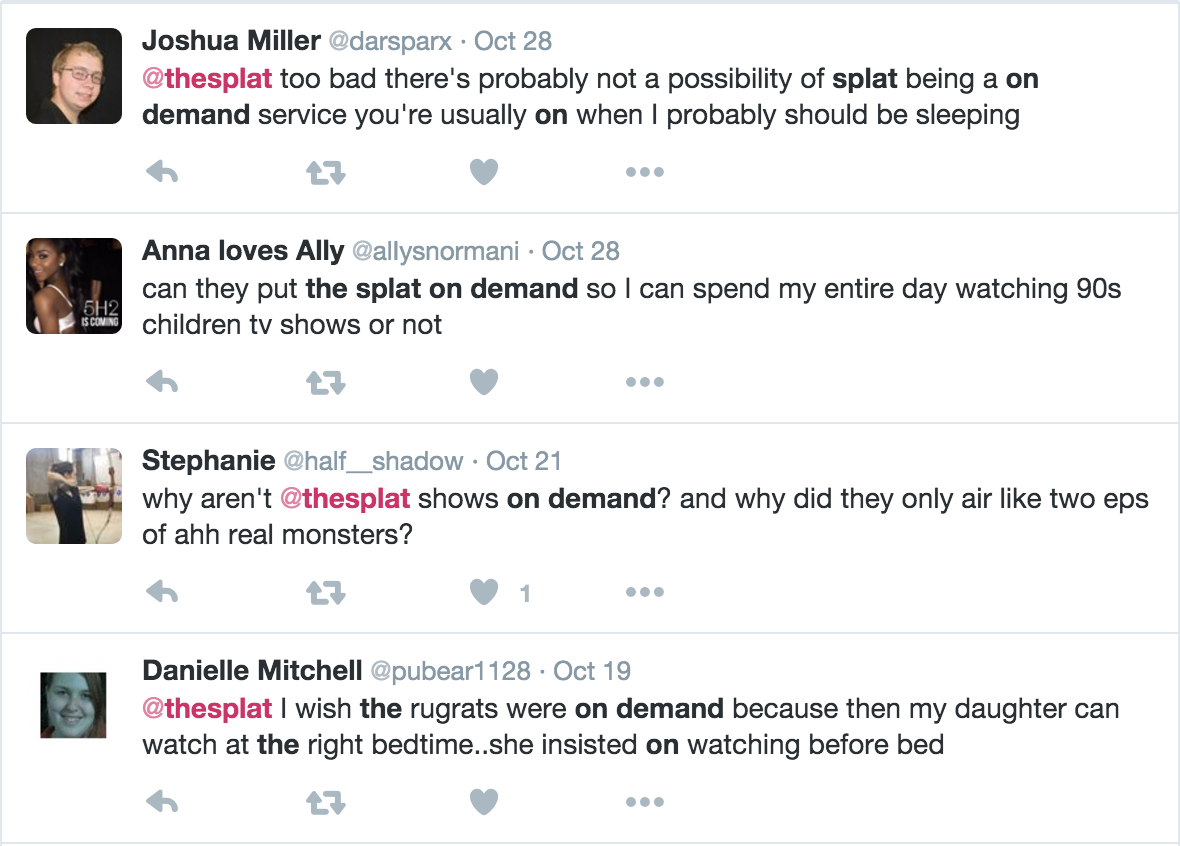 Again, as a millennial, I have to ask: If Nickelodeon executives are willing to resurrect my favorite 90s shows for time slots I won’t be awake to watch, why won’t they give me “Legends of the Hidden Temple” on-demand?

Nickelodeon has piqued the interest of Millennials fans across the US. Early warning signs, however, point to trouble ahead for their 90’s programming block with no on-demand options.