I said it. My friends said it. Critics even said it, but the data says otherwise.

Aside from raking in $2 billion at the box office globally, Star Wars: The Force Awakens represents a potential cash cow for the media giant if they can effectively market Star Wars to fans both new and old.

In 2011, at Toronto Underground Cinema in Canada, fans marked the first ever Star Wars Day, the target holiday for the Jedi phrase 'May the Fourth.' Since then, the holiday has continued to grow.

The Force Awakens Recap: Most people don't seem to care that Disney bought the rights to Star Wars.

Despite all my nerd friends' moaning and groaning that Disney would wreck the franchise -- South Park even chimed in with an episode -- it seems like the Walt Disney Company managed to keep the ship afloat.

When people talk about Star Wars, they're not talking about Disney.

In 2012, Disney acquired LucasFilm for the price of $4.05 billion. In 2013, Disney saw the potential benefit to fan favorites like 'May the Fourth,' emphasizing discounts and incentives for Star Wars fans across its parks.

Star Wars might take place in a galaxy far, far away, but it's still just one small part of the larger Disney universe of properties. At its very most during the movie release for The Force Awakens last December, Star Wars comprised just 16% of Disney's overall social traffic.

The next-highest volume event took place when Disney announced their acquisition of LucasFilm, representing 6% of the overall conversation volume.

When looking at references for Disney within Star Wars, conversations spiked as the franchise sale was announced. This event held 21% of overall Star Wars conversations and then trailed off quickly.

Good news, though -- people like Star Wars branded either way.

Sentiment results for Disney and LucasFilm are remarkably similar, averaging 72% and 70% respectively. If fans fatigue of a particular campaign, Disney may find it useful they have both production brand names available to engage audiences.

While both brands are relatively popular among all Star Wars query participants, we wanted to investigate the infamous gender gap in geek culture.

Anticipation is a key driver for Star Wars' die-hard fans.

The Force Awakens drew big numbers of fans to premiere night, both new and old. On social media, fan reactions to the latest installment tended to split along those lines.

Social conversation from the general public, or where we'd be most likely to find new fans, reflects a much more balanced emotional distribution than long-term Star Wars die-hards.

Die-hard fans' emotional response to The Force Awakens centered mostly on Joy and Sadness at 25% and 16%, respectively. Their responses come mostly from the nostalgia of seeing their fan-favorite characters on the big screen again and the resulting plot twists in the new movie.

Anticipation registers as the top emotion for all fans.

Disney played right into fans' hands by announcing that the original cast would all be reprising their original roles in the series. Fans carried this torch forward with enthusiastic discussion about the new additions to the Star Wars cast, with Kylo Ren quickly emerging as the breakout fan favorite among the general public.

The general public also has a soft spot for Poe Dameron, though they've recently started to love Rey second only to Kylo Ren. In all conversations about the new characters, the top three emotions are Anticipation, Joy, and Trust, at 23%, 15%, and 13%, respectively.

Even with a little deviation in the data for how the public feels about Disney's new characters, Disney should recognize that their practice of pairing major announcements with fan favorites -- like they did by announcing the new trilogy with all original cast members returning -- tends to drive social buzz even higher.

Disney should aggressively support 'May the Fourth' and gear its marketing efforts toward supporting Star Wars' core fans.

Fans of 'May the Fourth' are long-time supporters of the Star Wars franchise, and as we've already seen -- they don't really care that Disney is butting in on their fan holiday. Here are a few suggestions using our example for targeting other audiences using similar tactics:

1. Narrow in on a widespread celebration to target the people who participate.

It's actually super easy to do this for Star Wars. 'May the Fourth' will accomplish exactly our purposes -- looking at a specific conversational group on social media.

It's a reliable event, with relatively no conversational spikes bleeding out into the rest of the year. When we target this audience, we can look at what topics Star Wars fans are talking about and how they feel about these topics when they do.

2. Dig deeper into the overall profile of your query participants.

Who is the most likely person you're talking to when you're looking at the Star Wars audience? Using the audience segment we constructed from 'May the Fourth' conversation data, these are the details from participating sources for our query. 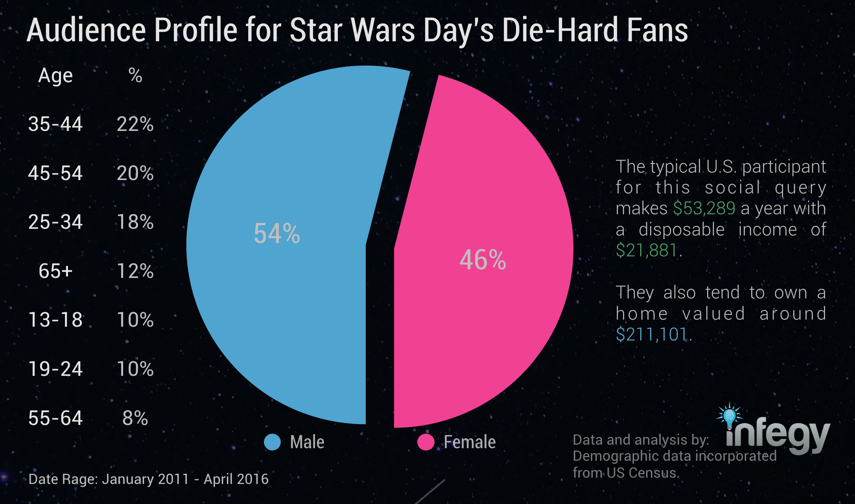 Your general idea of Star Wars' fan base is probably correct. Fans above the age of 35 comprise 62% of the segment population. Fans are most likely male, though female audience representation isn't far behind at 46%.

Using post data from all sources in our target audience, we can also analyze the interest profile to see what other topics our audience discusses as well as the relative frequency with which they do so. 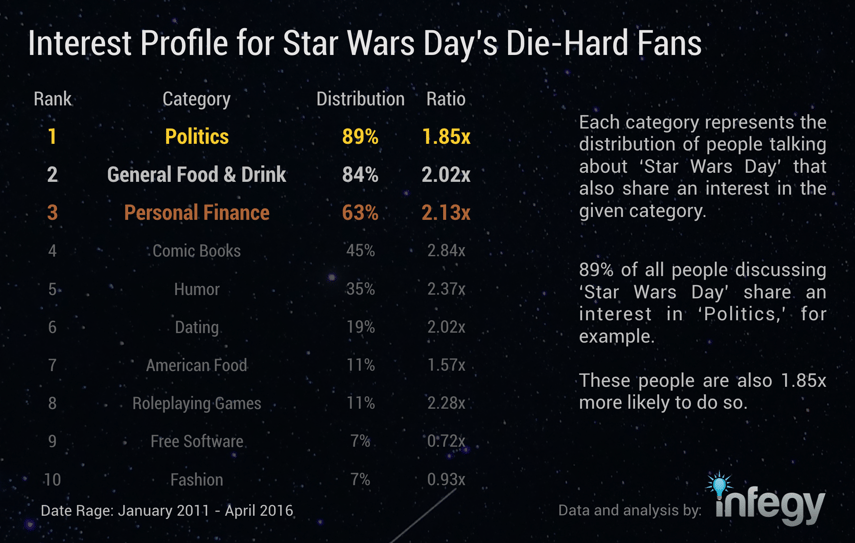 In addition to a demonstrated interest in politics, 84% of Star Wars fans also talk frequently about Food/Drink and Personal Finance.

Disney has already capitalized on these preferences across its parks by offering some incentives for fans as well as special events, but it could double down on current efforts and expand into these new categories, too.

Dating, for example? Disney parks could offer some kind of 'singles' night to align another interest cluster they already know the Star Wars audience shares with its main base.

If Disney wanted to go down this singles-night path, it'd be even easier to target male and female audience members, too. As we demonstrated earlier, using 'Disney' branding to engage female audiences results in markedly higher engagement while male audiences responded more frequently to LucasFilm.

'May the Fourth' is a multi-generational marketing opportunity.

Bonus points! Disney can forget about focusing on Millennials. With just 38% of Star Wars' hard core fans under the age of 35, most of the franchise's traditional gambits should still work: call-outs to Leia, R2-D2, and the cast members from the original trilogy, for example, worked to spur fan discussion about new cast members.

The presence of such a diverse lineup of stories allows Disney to extend its reach to new age groups while still retaining many elements from the original series that caused fans to fall in love with Star Wars from the beginning.

New character diversity in The Force Awakens was a good first step.

Earlier, we looked at how the general public responded to the new cast lineup. For long-term fans, the reaction to new characters in The Force Awakens was a great first step. 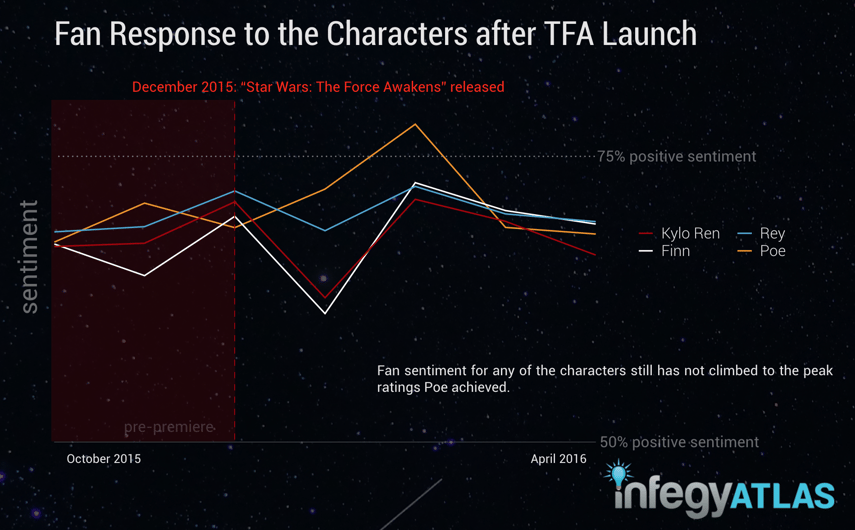 Top fan emotions are the same as for the general public -- Anticipation, Joy, and Trust, again -- but to a marginally lesser degree among our target group than for the general population as a whole.

There are awesome indications that the Star Wars franchise actually prefers more diversity in its cast lineup, too.

Star Wars fans didn't flinch that Luke could be gay.

On March 3, 2016, Mark Hamill was quoted in Britain's Sun for comments that opened the door to speculation on Luke Skywalker's sexuality. Hamill has also commented publicly on the discussion with social media users as well:

According to social data, Mark Hamill has averaged around 65% in positive public sentiment since January 2011. After his comments in March, there's almost no deviation in his overall sentiment patterns, which would seem to indicate that Star Wars fans don't care that Luke might be gay. 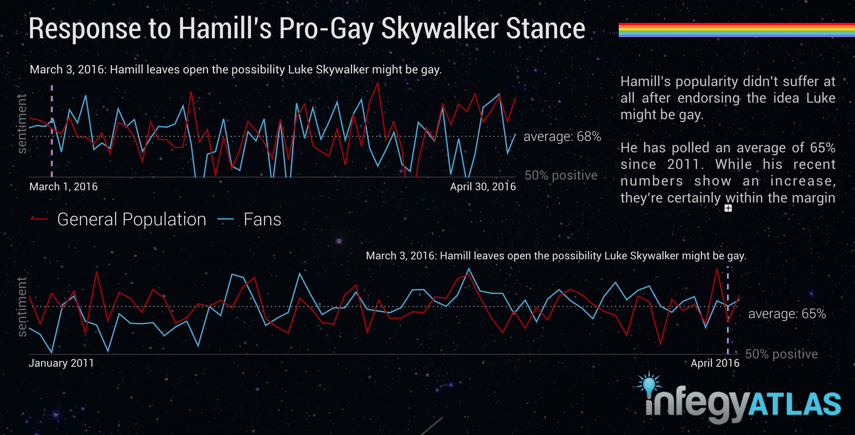 Especially after this year's conversation on diversity in Hollywood, Disney would do well to take a lesson here.

Granted, we're talking about sexuality in this case, but with such a wide array of properties at its disposal, Disney bears the responsibility for every story it decides to produce.

If Star Wars fans are open to featuring stories outside the typical heterosexual standard, Disney has an opportunity to take a bold stance in support of traditionally marginalized stories and stand up for its fans, as it did with the widely successful 'Gay Days' in the past.

Remembering our discussion of aligning Disney's promotion efforts with Star Wars fans' top interest categories, can you even imagine if they gave out rainbow lightsabers? At a Disney singles event? Sign me up.

Disney has done well so far, but social media secrets could help them unlock even more growth potential:

Disney didn't ruin Star Wars, after all -- yet.

Having personally experienced some of the Star Wars content in Disney's parks, I can say the media giant seems to have a genuine soft spot for Star Wars, too, beyond its appeal as yet another cash cow for The Walt Disney Company to gobble up.

Hardcore fans were enthralled by The Force Awakens, but all signs suggest Disney could have been bolder with its latest sequel. Despite being the protagonist, for example, Rey was left out of the initial toy shipments to stores altogether.

By using social data to reliably target core fans, Disney and other brands could hedge against or even prevent these snafus from happening in the future.