This post is the first in a series that will examine many of the top issues US presidential candidates will discuss as they vie for the White House this November. As we have previously discussed, traditional public polling methods are on the decline. As people answer their phones less and migrate towards the internet more, a viable alternative polling method has yet to be discovered.

For both the 2008 and 2012 campaigns, however, the Obama campaign and the Democratic party were able to harness “big data” with unprecedented success. In the future, social media research hopes to be able to fill that spot. For now, however, we can easily apply our research methods toward topics to explain public conversation sentiment.

Make no mistake: everyone will be hearing lots and lots about the US presidential election for at least the next 11 months. Pundits, talk shows, newspapers, Twitter, Facebook, blogs (yes, even this one), and families around dinner tables across the country won’t be able to stop themselves from talking (or arguing) about the candidates’ performance at their various events.

Google Trends documented their top search topics requested throughout 2015. Coming in at #5, ranking at 338 million searches, is the 2016 election. 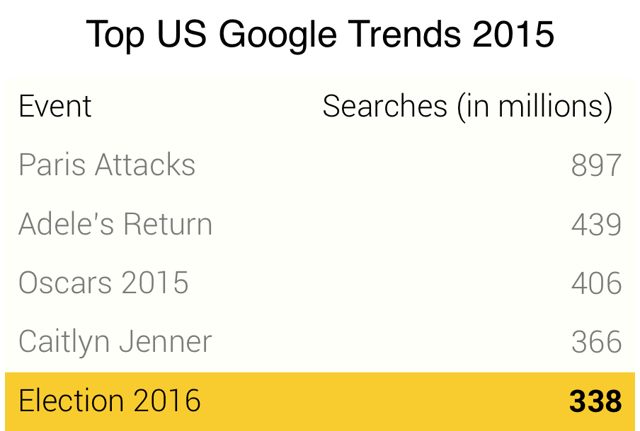 There are MANY Campaign Events to Track

Tuesday, November 8 is election day. Voters all over the country will flock to their polling places and cast ballots in favor of their favorite candidates. Even before that happens, however, there is a long list of other events that will be of crucial importance to candidates, which will influence them to adapt conversation topics to fit their audience's preferences as well.

As of the writing of this post, the next presidential debate will be hosted by Fox News for the Republican candidates on January 28. Interestingly, there are 6 Republican debates left, while the Democrats only have 2, on February 11 and March 9, respectively. The general election debates are left, as well, but those won’t happen until September/October at the earliest, with three Presidential and one Vice Presidential debate on the schedule.

Why does this matter? Web traffic tends to spike around each of these events. Again, Google Trends data demonstrates this to be true across 2015:

We can reasonably expect this trend to continue, as well, as the election coverage only tends to intensify as time ticks towards November 8. For social media research, this means a spike in conversation volume as candidates, the parties, and other figures engage with their constituency across their preferred channels.

In 2013, after the conclusion of the 2012 election cycle, we analyzed social media research data and compared it to the results of public opinion polling. We examined the results of our program, Infegy Atlas, against both analysis of Twitter and the Pew Research Center, finding that for events with an undetermined outcome, like debates and speeches, there is a strong correlation between social media research data and public sentiment, as it might be expressed through a general opinion poll.

While the correlation is less strong for events with decided outcomes -- election results, for example -- social media data demonstrates a consistent bias toward the winner, instead of political or topical bias as we’d expect in something like analyzing Twitter on its own. Our ability to broadly analyze social data results in statistically reliable data.

The average deviation for social media research against Pew Research polls measures just 2.7%, near the polls’ margins of error. By analyzing the broader social dataset, we are able to virtually mirror traditional opinion polling with a much more automated methodology than traditional polling methods allow. This enables powerful analytic tools, like live social media research analysis such as the one we demonstrated for the CNN Republican debate on October 28, 2015. We were able to analyze each candidate as they were speaking to provide additional insights, like word clouds to demonstrate the language candidates used, segmenting their comments into specific political issues. We were even able to display live psychographic and audience analysis, showing the emotional responses to candidates’ positions in real time, as well as gender distribution.

Traditionally, polling is a time-consuming and expensive process, getting less and less reliable every year. Social media research allows analysts, researchers, agencies, political campaigns -- almost anyone who uses the tools -- to provide comparable results in less time, much more cost effectively, with data from millions of people, rather than simply hundreds or thousands.

As we established above, historical findings indicate that in discussions of events which have a decided winner, winners (and their supporters) tend to be more vocal about victory than the losers. Logically, this means that social media conversations will shift accordingly as the potential number of “winning” candidates narrows to one for each party; during the presidential primary, this means that if historical trends remain true, social media research should demonstrate a consistent correlation to our eventual winner.

If there’s one issue that’s been discussed consistently for each of the past two elections, it’s the economy. Younger Democratic voters seem to respond to Bernie Sanders’ anti-Wall Street message. Republicans have waited for the opportunity to seize total control of the budget. This year’s candidates will be no different. In the next post, we’ll see if there is any cents to this approach.