Which Super Bowl ads resonated with audiences according to social listening analysis? Here's our report card

The day after… Super Bowl 54 is in the books. And we’re partying like it’s 1970 here in Kansas City!

Many reputable publications out there released their “Super Bowl Commercials reviews” today. Each of these articles are full of “analysis” from some know-it-all who thinks they’re the one to judge the best Super Bowl commercials.

But that’s not what you need to know.

If you’re a brand who invested somewhere around $5.5 million for 30 seconds of airtime during the most watched televised event of the year, you want to know what the viewers thought. Did that ad add up to ROI for your brand?

Did audiences love the commercial? Hate it? Were they confused? Excited? ROFL? Meh? What if you could find out right now? We’ve got the data.

Analyzing audience reactions to the Super Bowl commercials is no easy task. But social listening allows for finding out how viewers’ felt about the ads instantly.

We’ve taken some of the top ads and analyzed them for popularity (post volume), ability to drive audience emotions, and how positively audiences reacted. Let's dive into each of those insights:

+ Sentiment: For sentiment analysis, this appears as a 0-100 in percentage. Representing the percentage of posts that have a positive sentiment.

Emotion Score: The emotion score is based off of a score of 0-100, calculated by analyzing the number of posts that expresses an emotion, not including re-shared posts.

Here's how it shakes out: 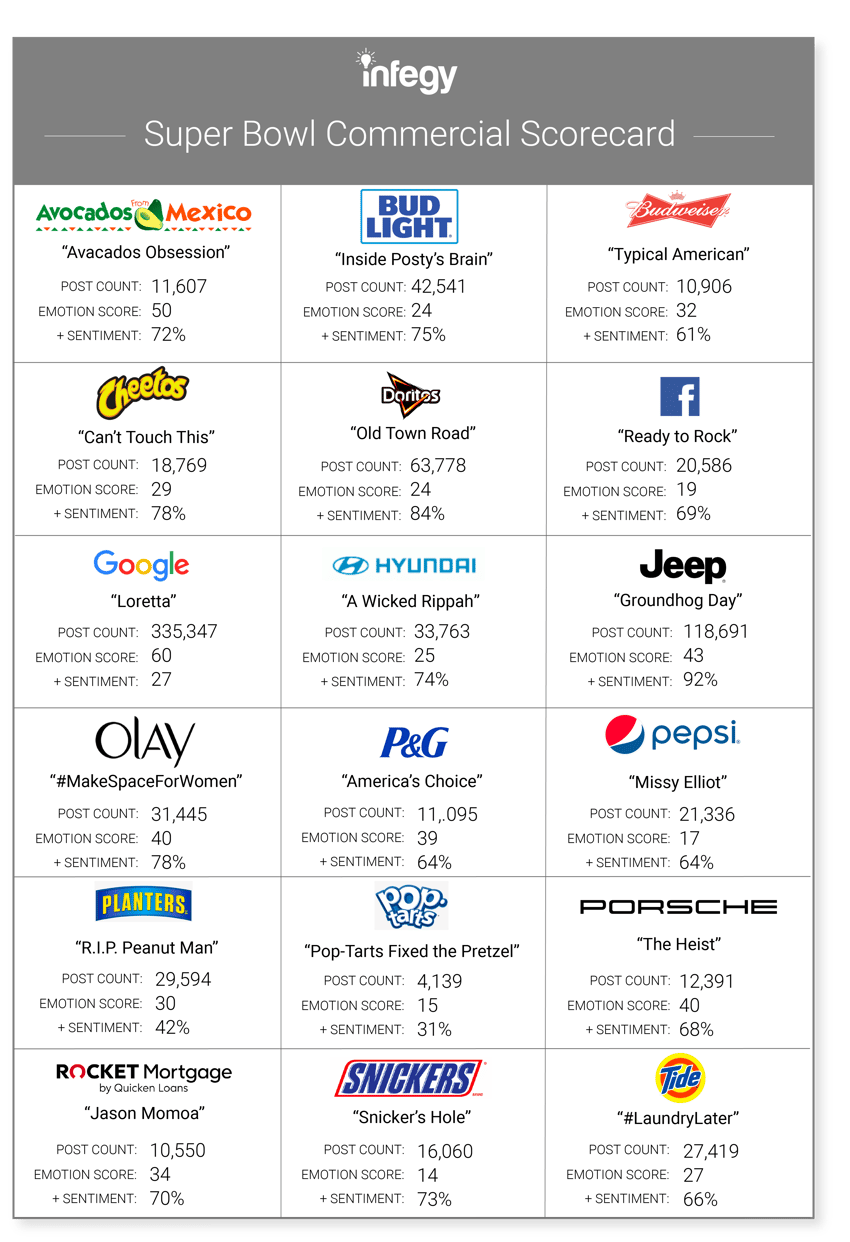 Pro-Tip: Why emotions? We included emotions that the audiences express as part of our Super Bowl commercials analysis because emotions are proven to drive people to act, especially for big event advertisements such as the Super Bowl.

You can use our social listening analysis, to find out which brands won Super Bowl 54, and which were left behind in the Cheetos cheese dust. Here are the biggest takeaways:

Here’s a brief overview of some of the top Super Bowl Commercials winners and losers according to our social listening analysis of the audience’s reactions:

Who doesn’t love Bill Murray? Bill Murray parodying one of his most iconic roles in a Jeep commercial? That may have won the night. Murray Re-enacting Phil? Phil?! from Groundhog Day made for comedy gold, as he cruises around small town Pennsylvania in a Jeep with the groundhog riding shotgun, getting the second most conversations, the third highest emotion score, and highest positive sentiment of any Super Bowl commercial of the night. “Don’t take it personally” Murray says to the groundhog while he plays whack-a-mole. Classic!

Hyundai’s ad, created by Innocean Worldwide, received plenty of high marks for its hilarious take on the Boston Accent with John Krasinski, Rachel Dratch and Chris Evans (with a special appearance pride of Boston’s David Ortiz). As one of the most talked about ads of the night and a 74% positive rate, most audiences thought this one was “wicked smaht.”

Snickers found success with 73% positive sentiment by throwing shade at internet culture, claiming that maybe the world is messed up because it’s hungry and needs a giant Snickers. BBDO New York’s clever end throws two people taking a selfie into the Snickers hole, with the perfect line: “the Snickers hole is working!”

Doritos went for its third straight year of a dance off, this time between Lil Nas and Sam Elliot, to the tune of Old Town Road in a wild wild west setting to promote Cool Ranch Doritos. Audiences discussed the ad with 84% positivity and an emotion score of 24 according to our social listening data.

Olay’s all-female cast scored big with 31,000 conversations, 78% positive rate and 39 emotion score, but the real win for the beauty brand is its trending hashtag, #MakeSpaceForWomen, which appears to have real staying power moving forward.

The Rest of the Winners:

Tide was ever present throughout the night- something they’ve done in the past with great success. P&G deployed Charlie Day to procrastinate on laundry day all night, with special appearances by Gal Gadot’s Wonder Woman and the Bud Knight.

Wieden and Kennedy took Bud Light inside the mind of Post Malone, and it got people talking, with 42,000+ conversations and a 75% positive sentiment. And Rocket Mortgage surprised everyone by featuring Jason Momoa and super skinny Jason Momoa.

In stranger takes, Mountain Dew struck gold with Bryan Cranston doing his best “here’s Johnny” in a satire of The Shining (from agency TBWA/Chiat/Day). And Google inspired the most conversations, including the top emotions score (60). The online search brand brought the world to tears (or creeped us out, depending on who you ask), with an elderly man’s quest to document all of the memories of his wife on Google.

Vayner Media’s campaign that killed off Mr. Peanut went absolutely viral over the past two weeks, but the payoff was less well received. While the ad was highly discussed, it only received 43% positive rate.

For more analysis on the best Super Bowl Commercials 2020 and to learn more about how we got the insights, reach out to our team today! 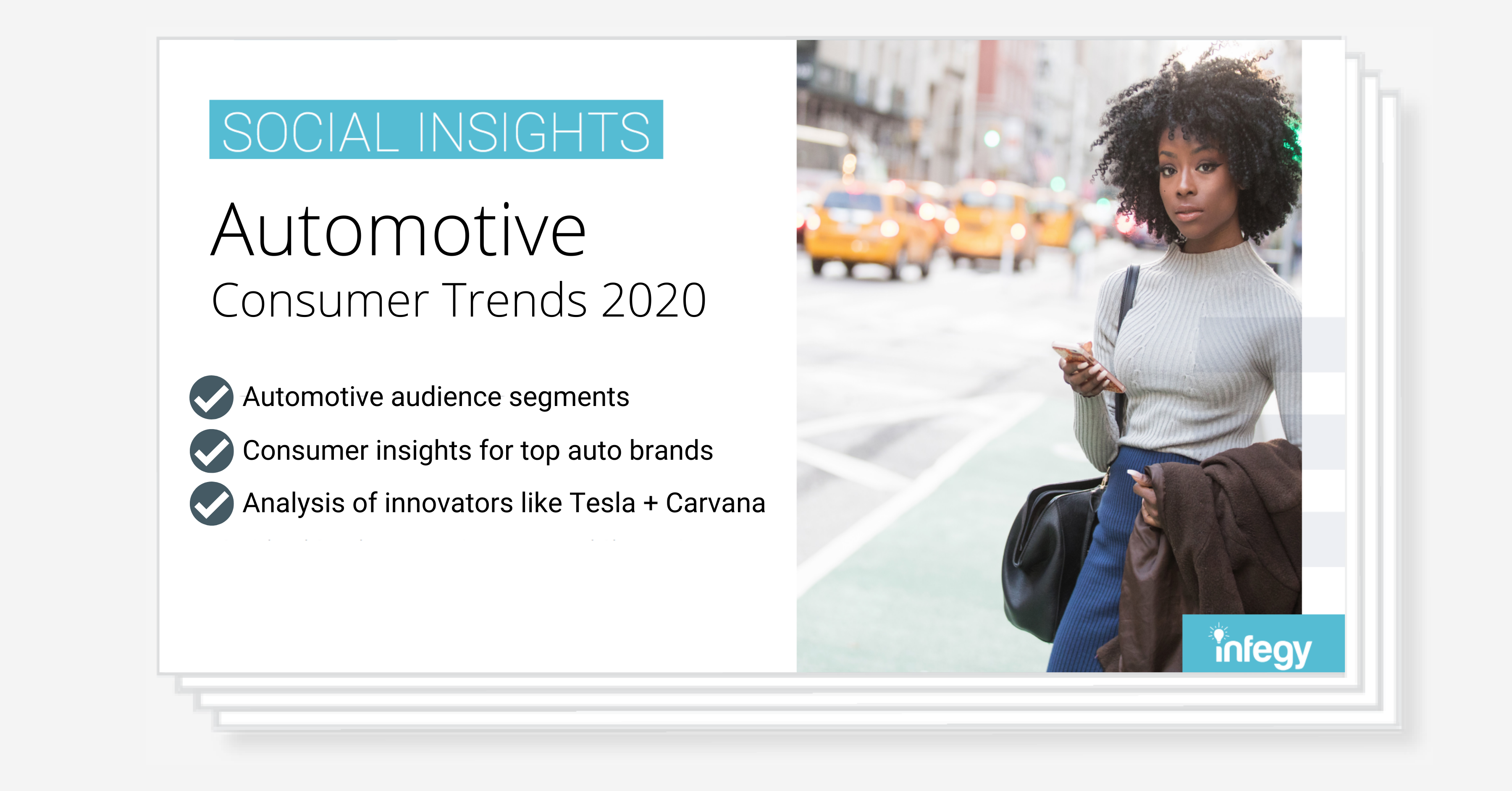