5 million dollars. That’s how much it set a company back to advertise during Super Bowl 52 in Minneapolis this year. NBC received that cool 5-million for each 30-second spot that aired during the most watched television event of the year. When we finally see the bank statements, NBC expects that Sunday’s telecast will amount to the single biggest day of earnings by a single company. Ever.

So was all that cash from these companies worth it? Did brands get what they wanted after such a big spend? That remains to be seen.

But the great thing about Super Bowl ads in 2018 is that we have artificial intelligence and machine learning capabilities that can help us gauge the audience reaction to commercials immediately after the fact.


One reason for this is that the first place people turn to after a Super Bowl Commercial to voice their opinions is social media, where they broadcast their love, hate and indifference right after they air.


We have the technology to analyze these far reaching conversations in real-time that enable us to get a pretty accurate measurement of the reaction received by each ad.


With the help of the machine learning and intelligence capabilities within Infegy Atlas, we’ve analyzed the early reaction to these Super Bowl ads to see which were the best (and not so best) received commercials.


We conducted this analysis immediately after the ad aired in real-time, and then again the morning after to help do a full autopsy. Which ones were a roaring success and which missed the mark, according to audiences around the globe?


Here’s a breakdown of the different ads that aired followed by what our analysis said about the best and worst Super Bowl Commercials 2018 edition:

Which Brands Had Facetime During Super Bowl LII?

Below, you'll find our analysis of each of the best and worst rated ads from the game. But first, here's what we saw during the 4 hours of Super Bowl Sunday.

Brands pushed creative and innovative boundaries this year, going with more inventive ways to reach audiences with their message. For instance, Skittles offered up an ad for just one person, while PepsiCo. combined two different brands and products into one double-length spot starring Morgan Freeman and Peter Dinklage.

A few brands made their debut advertising on Super Bowl Sunday: Pringles, Intuit, Kraft and Monster Products. Additioanlly, a few notables were absent, such as Clorox, Google, Buick, YouTube and GoDaddy, all of whom have been mainstays in recent years.

This year's ads were interestingly self-aware, many breaking the fourth wall to cheekily claim that you were viewing a Super Bowl ad. For some, it really worked. For others, not so much. And by the end of it, it may have felt a little tired.

It will be interesting to see how advertisers correct themselves next year to keep from running this theme dry.

Another theme? Brands are clearly going after younger audiences, with design elements and fashion styles aimed directly at the millennial base. That strategy had its hits and misses as well.

For Diet Coke's strange spot for its new Twisted Mango flavor, an actress did overly quirky dances and the audiences were less than enthused, according to our data.

It's important for brands to do the proper research and develop an accurate picture of their targets. It's unclear what research Diet Coke did that made them think that the quirky millennial was the right audience. But making a push for younger buyers with declining diet soda sales in that generation seems pretty ambitious for advertising's biggest stage.

Brands can do more accurate research about their target audiences with the brand new Infegy feature: the age-filter. This helps researchers refine their search and analytics to data within in a certain age range. Learn more about it here.


Now, let’s take a look at some of the best and worst reactions to the ads from Super Bowl LII.

For the purpose of this article, we analyzed the ads in our social listening tool, Infegy Atlas, then took the sentiment score and emotional trends analysis features to see which spots came out on top. 60% and higher sentiment scores were graded as positive (thumbs up), and 59% or lower were given a negative (thumbs down) score.


What’s great about this is that we can get a great read on the audience’s reaction just minutes after the ad aired. To let the dust settle and let other sources get a chance to chime in, we’re showing you the data for a 12-hour span, from during the game up until the morning after. (You can choose any time frame dating back 10 years in Atlas' search query builder)


We’ve also included a snippet of a user-generated post that, in our eyes, most accurately sums up the overall sentiment from the public and also our little micro-review. Let's go:

Who doesn't think Peter Dinklage and Morgan Freeman in rap battle is awesome? This one wins based purely on concept.

Danny Devito perfectly embodies and humanizes the grumpy red M&M, even if the stuff going on around him (and running into him) isn't executed to perfection.

The outcry over this one was quick and loud. Martin Luther King Jr.'s speech voiced over an ad to sell trucks? Not the best choice. Especially when you consider that in this exact same speech, MLK made an argument against car advertisments and consumerism.

This one duped many and made us all belly laugh. If you hadn't seen any of the promotional material leading up to the weekend, you surely thought this was actually an upcoming movie.  Brilliant work by ad agency, Droga5. Fun fact: it's the first tourism ad to air during a Super Bowl. Judging by the reaction to this, it won't be the last.

Again, its tone and its target audience feels off. The combo of weird and "nothing special" isn't a great recipe for the big game.

You may not remember Pepsi's spot. And that's the problem. Not bad by any stretch. Just forgetful.

Amazon went all in on their extended ad that featured celebrities like Gordon Ramsey, Anthony Hopkins and even the richest man on earth himself, Amazon CEO Jeff Bezos. This one strikes a nerve of cleverness, absurdity and creepiness that makes it the ultimate Super Bowl spot.


Tide - It's a Tide Ad Campaign with David Harbour

Tide stole the show, interjecting at random moments throughout the night. Each commercial break, ad agency Saatchi tricked you into thinking the spot was for something else, and ultimately making you think: is every commercial really a Tide Ad?

If you put manly NFL players into one of the most famous dancing routines in cinema history and you pretty much have comedic gold. This is a great ad because it is designed for almost every audience, something really hard to do.

You can learn a lot more about how your brand's ad was received and which audiences it resonated the most using the research within Infegy Atlas. Here's a quick look at the results overview and persona summary for the best received Super Bowl commercial: 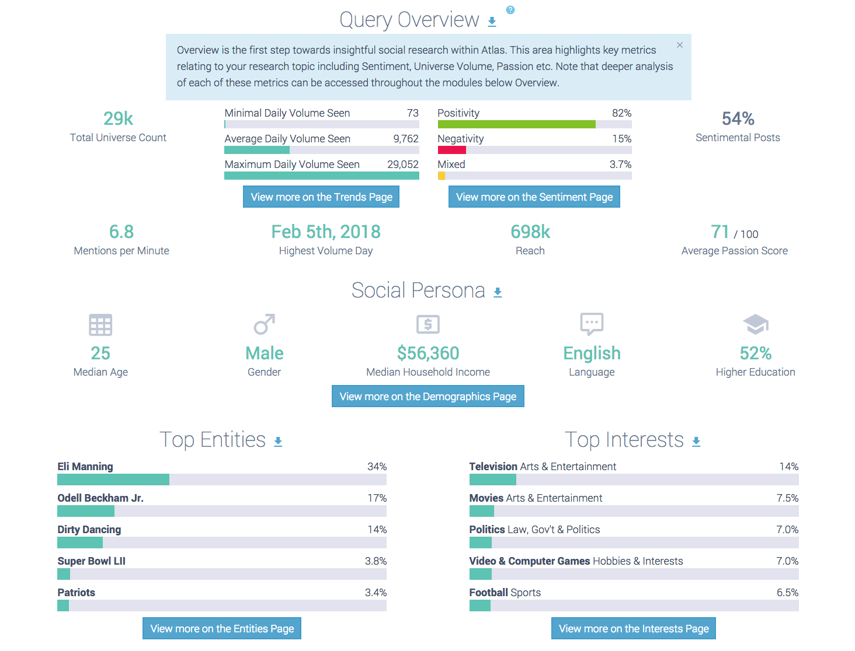 Want to see more about how you can reach and understand your target audiences better? Ready to do better analysis and predictions before you spend all that money on your next Super Bowl ad? Get a personal demo of Infegy Atlas today by clicking here.