Black Friday deals and their respective flash sales are finally over. Many of us can return to our favorite retail outlets, free of the traditional frenzied holiday crowd.

There is no denying that holiday shopping is an important segment of consumer spending.

Let me say that again: as much consumers might want to downplay the significance of traditional retail holidays typically beginning around Thanksgiving every year, there is no denying that holiday shopping is an incredibly important segment of consumer spending. Many estimates indicate that consumer spending makes up nearly 70 percent of the US economy, with almost 20 percent of retail sales taking place in November and December.

Early estimates, however, indicate that consumers are curtailing their traditional Thanksgiving weekend spending habits in favor of the convenience digital shopping affords them.

Is it really Black Friday deals that drive this trend? Is there perhaps some other explanation of consumer spending trends that might be a more useful benchmark for retail sectors during the holidays? In this post, we’ll examine social media dialogue associated with retail shopping in an attempt to examine this retail bonanza from a different perspective, looking at the actual opinions of consumers speaking from their own experience.

To start, these are the sales figures I was able to find reported between ShopperTrak and the Adobe Digital Index, providing sales data for both brick-and-mortar outlets and Cyber Monday expectations, respectively. 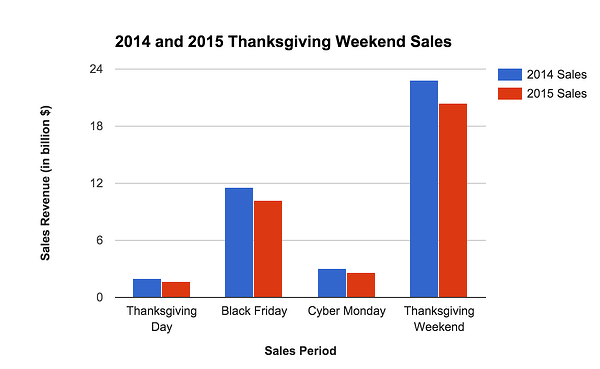 Ben Casselman, chief economics writer at FiveThirtyEight notes, however, that the data we’re hearing reported is missing actually relevant, useful information about the state of the economy. First, it seems difficult -- if not impossible -- to produce reliable sales figures that quickly. Second, even if we did have the precise dollar amount of consumer spending taking place over Thanksgiving weekend, it likely wouldn’t explain spending trends for the holiday overall.

It’s true that more consumers are shopping online instead of waiting all night for doorbuster deals at brick-and-mortar locations, and this is causing different kinds of consumer headaches. For example, Neiman Marcus’ website crashed altogether, causing the retailer to extend their deals in apology. 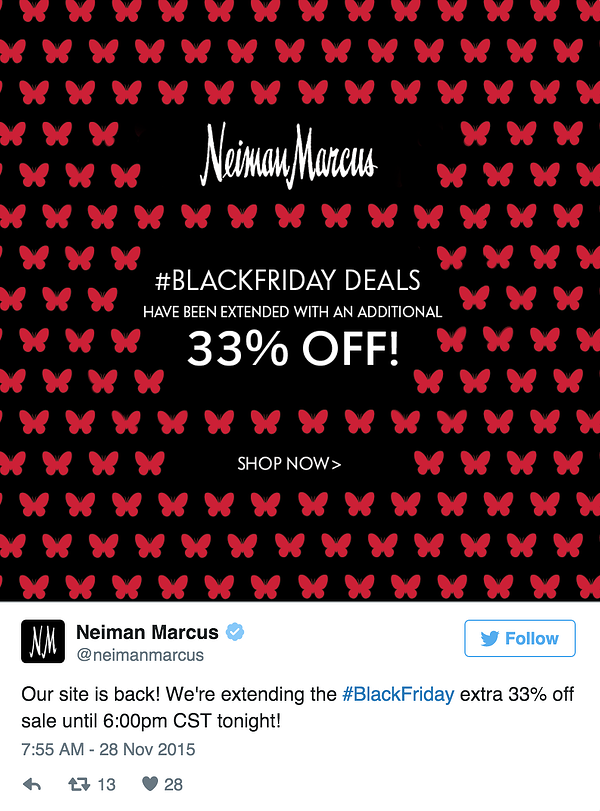 Walmart, too, was bogged down with processing so many customer transactions that checkout times slowed significantly. Amazon, however, flexed its capacity to keep up with digital consumer demand, dominating its competitors by accounting for 35.7 percent of e-commerce on Black Friday, according to package tracker Slice Intelligence, Black Friday sales were up 7 percent year-over-year.

Again, to Casselman’s point, this is in direct conflict with many of the other figures available, which illustrates the difficulty in accurately projecting sales figures. Moreover, however, a recent suggests that retailers might sell as much as 36% more if their purchase experiences were optimized for mobile checkout, too.

In our look at public conversations across November 2014 and November 2015, we can see that the way people talk about their shopping experiences is nearly the same. If anything, their digital commentary indicates a more moderate response across all of the days consumers would typically be the most stressed by retail traffic. 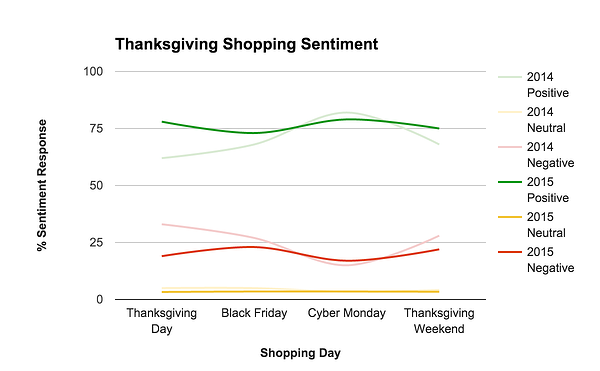 Even real-life disruptions don’t seem to phase shoppers -- while early reporting results might indicate vast swings in their purchasing habits, people tend to turn out in droves to purchase holiday goodies.

Negative topics extracted from online conversations in both 2014 and 2015 are indicative of regional protests, corresponding with outrage toward the behavior of police in Ferguson, Missouri and Chicago, Illinois, respectively.

But as large an effect as these protests had on their regional retail environments, they don’t seem to have had any lasting effect on the conversations (and consumer purchasing conversation) as a whole, with more positive conversation taking the place in overall topic charts.

Casselman seems to be correct in asserting that early sales figures mean very little to the overall holiday trends. Consumers are driven to purchase trends by as-yet unexplained trends. Kathy Grannis Allen, spokeswoman for the National Retail Federation, a trade group that commissions an annual survey of Thanksgiving-weekend shoppers, indicated that “[t]he weekend is tremendously important for retailers, but in terms of it being an indicator for how the season is going to perform, it’s not the best bellwether.”

As Ben Casselman concluded at FiveThirtyEight, “the only way to know how the holiday season will go is to wait and see.” He may very well be right.