Every month it seems that there is a new diet or health food being discussed as the miracle for solving a health problem, preventing disease, or melting away unwanted fat.

From vegetable oils like Olean that touted no fat, calories, or cholesterol, but with the added effect of severe stomach cramps, to low-carb diets like the Atkins Diet, that left dieters in a constant state of exhaustion, health trends are always in flux.

To pinpoint the health and diet trends consumers are most enamored with, Infegy Atlas, a social media monitoring tool, was used to identify the 80 most common health and diet topics being discussed on news sites, blogs, forums and social channels in the last 6 months.

Continue reading this post for the highlights, or grab the PDF for the full report.

Consumers are becoming increasingly more focused on fresh and natural ingredients rather than their preserved or frozen forms. In conjunction with increased consumer focus on fresh, natural ingredients, accessibility of recipes and other resources online are making it easier for consumers to overcome convenience and knowledge barriers to preparing natural foods. 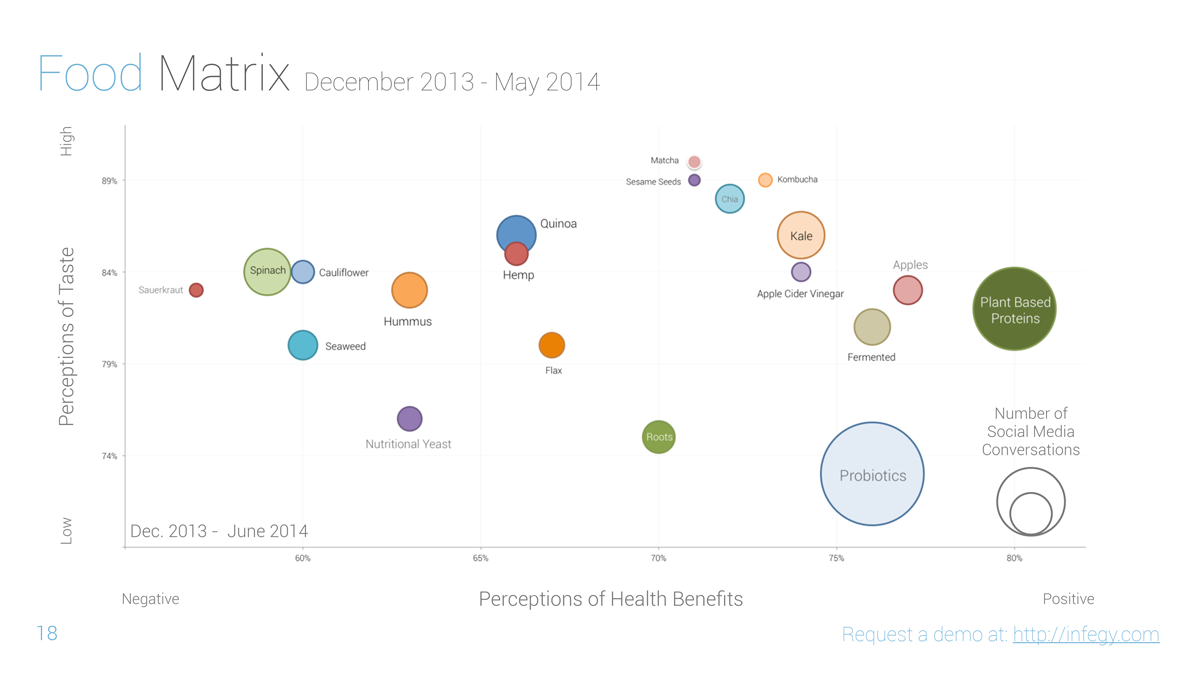 Weight Watchers was the only commercial diet to break into the top 5 diets, while also being the most discussed diet overall. This appears primarily due to the high profile success stories of celebrities and reality TV personalities. 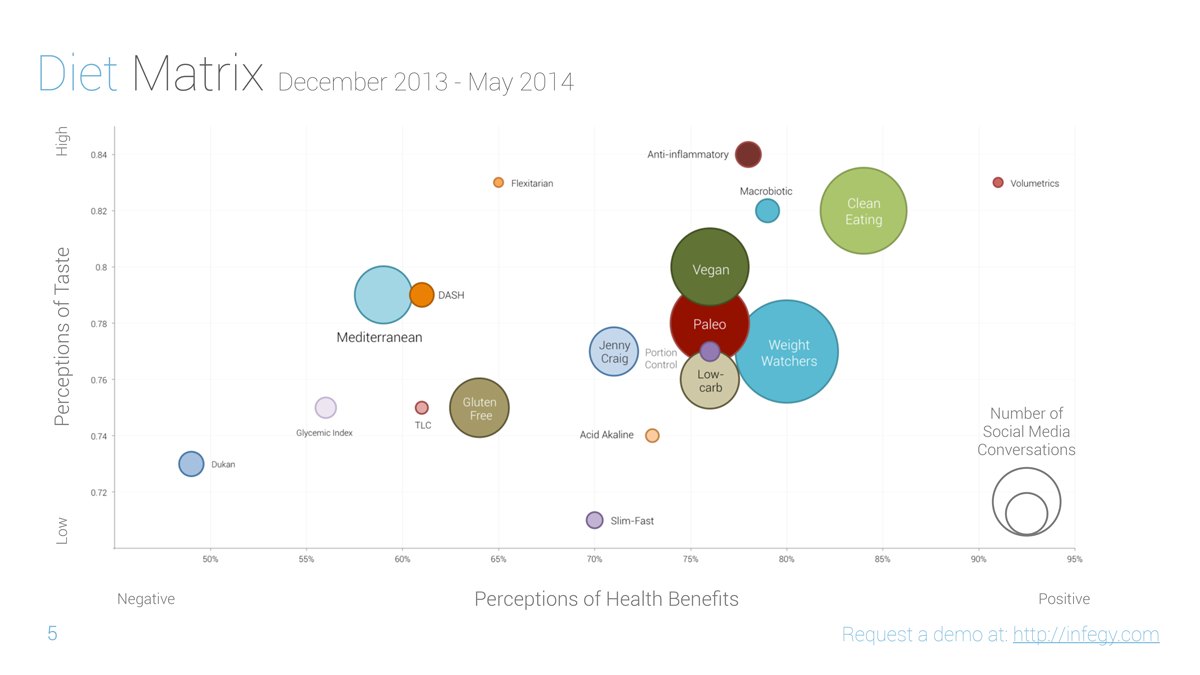 Although Weight Watchers received the most mentions overall, the diet was only favored by consumers 55+. All other aged groups gravitated towards non-commercial diets. 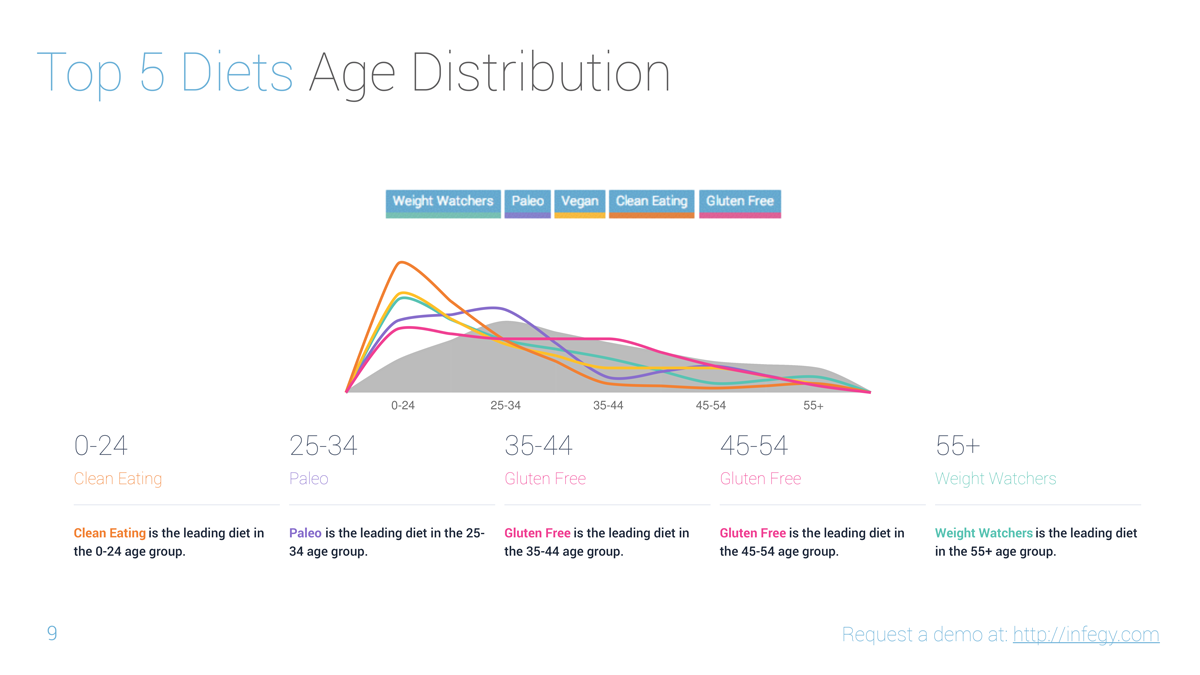 By a severe margin, consumers focused on fitness and appearance goals over all other health benefits when talking about dieting. When discussing health foods, the goals were not near as one-sided, with cancer edging out fitness for several foods. 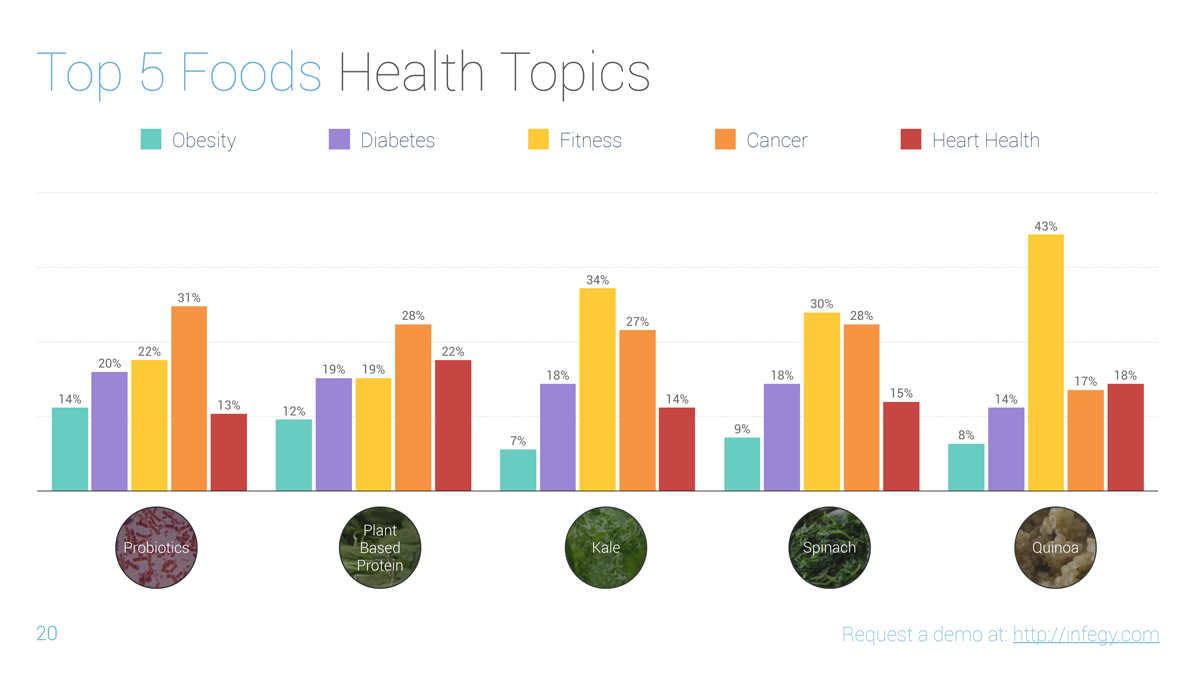 Midwest consumers were the least involved in health food and diet discussions by a wide margin, making up just 17% and 16% respectively. 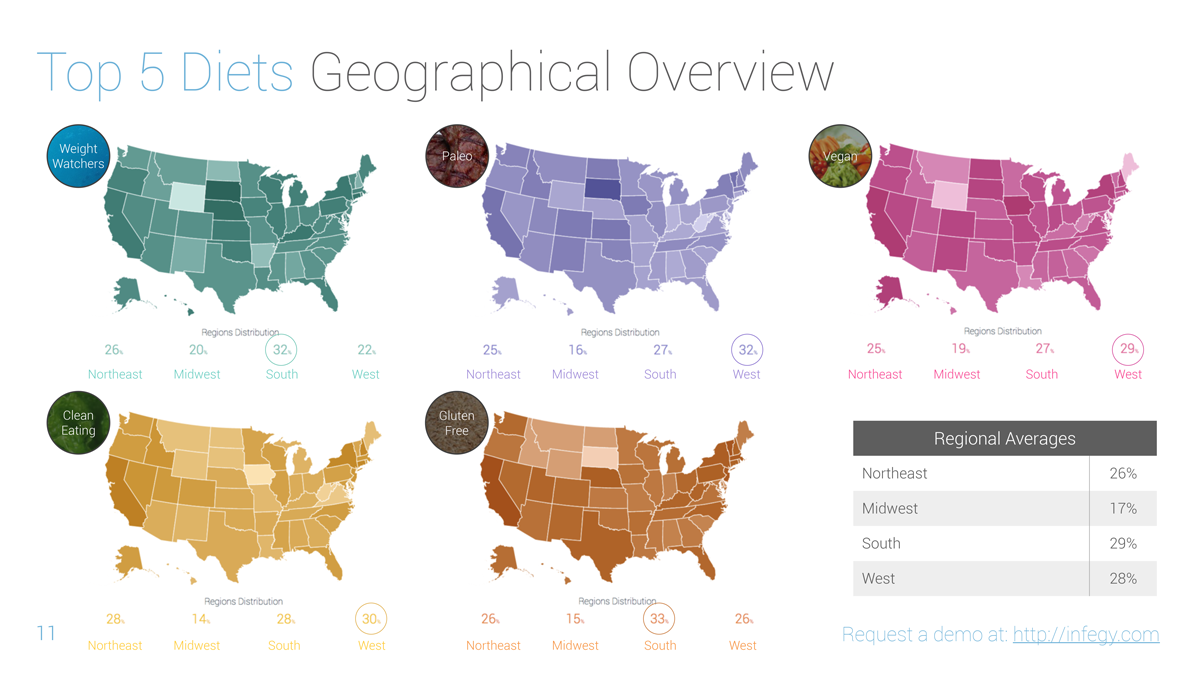 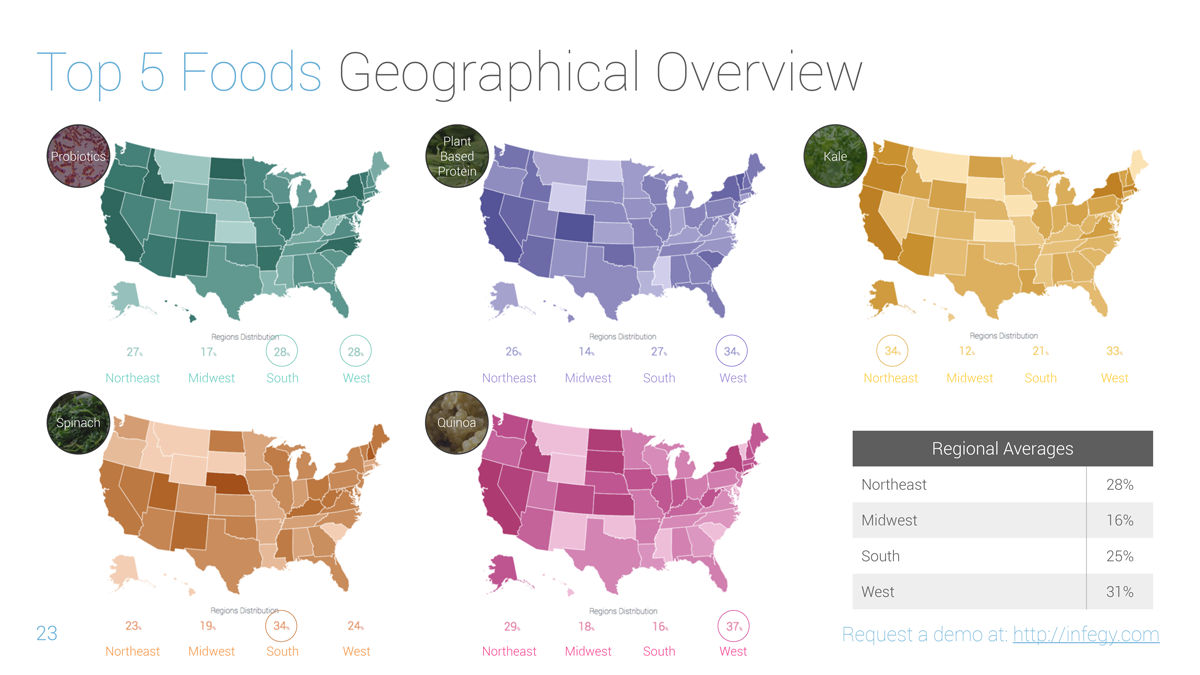 Probiotics Are Top of Mind in Health Foods

While Kale and Quinoa seem to be all our office hears about, probiotics are actually discussed the most online.

Outside of just diet and fitness, probiotics were frequently referenced as being significantly beneficial for yeast infections. 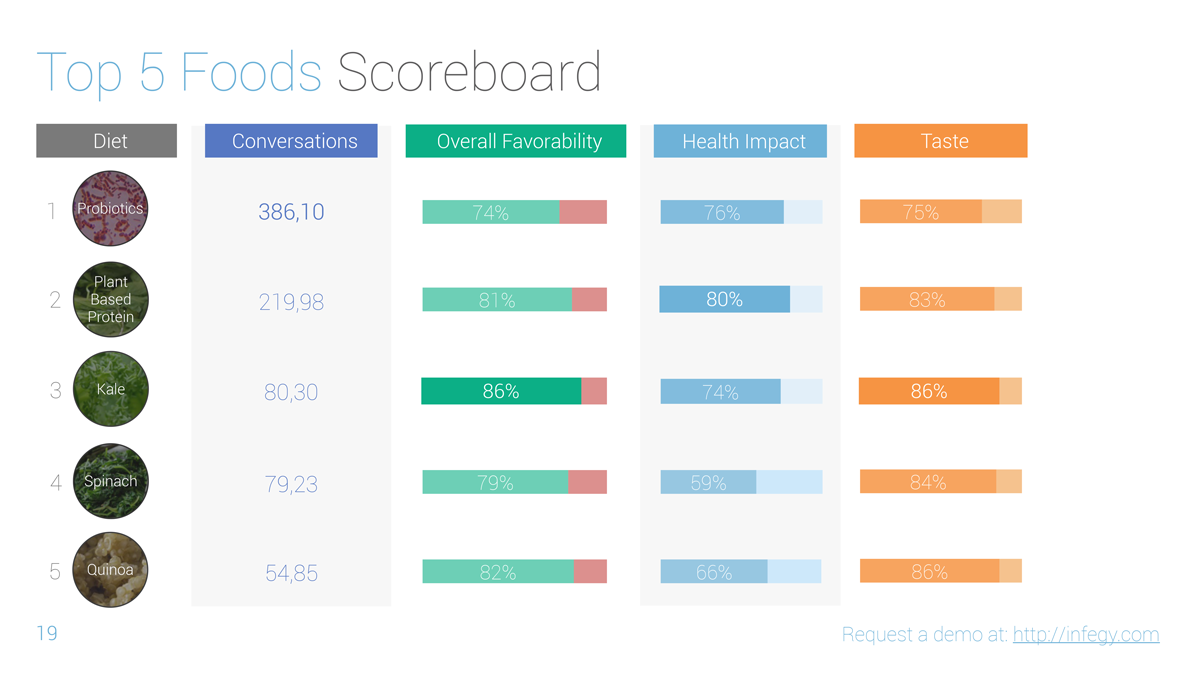 Over the last twenty years food manufacturers have marketed convenient processed products to health-conscious consumers under the perception of healthfulness due to lower fat content, less calories, and/or absence of sugar.

Often, these products include all the makings of what is thought to be a healthy meal, including ingredients like vegetables and grains.

However, consumers are becoming increasingly more focused on fresh and natural ingredients rather than their preserved or frozen forms.

Furthermore, big name diets that were once synonymous with weight loss are being outstripped by general concept diets built around consumption of natural, healthy foods.

Combined, these perceptions around both diets and foods point to an upward trend in natural ingredients.

Looking for the full version of the report?